Bennett College Ruins From Halcyon To Reinvention In Millbrook NY


Bennett College Ruins From Halcyon To Reinvention In Millbrook NY 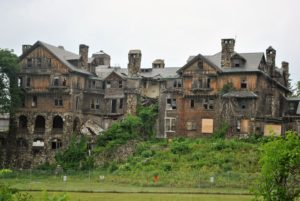 Anyone who has passed through Millbrook NY has probably viewed the ruins of the imposing structure that was once Bennett College. For the casual Hudson Valley sojourner it’s a curio landmark that usually elicits stares and intellectual head scratching. Granted, there’s not much there to help explain this sprawling landmark anomaly.

For local residents it has come to be part of their local history. To some it has become a chronic eyesore and for long time residents it is a heartbreaking memory.

Regardless of its present status, the property does have an interesting history that presents it in a much different light than what the eye would behold today. Indeed, the old place has reinvented itself several times and may be doing so again.

The magnificent edifice was born as Halcyon Hall, a resort hotel built in 1890 with comfort and elegance as its calling card. It was specially designed for guests who cherished their reading time and was therefore built with a large number of private alcoves and nooks where one could enjoy a good read in peace and comfort.

As was the case with most women’s schools, the rising popularity of coeducation in the sixties and seventies created enrollment and financial problems. Attempts at upgrading the school and offering coed programs left the already financially distressed school even deeper in the hole. An attempted collaboration plan with Briarcliff College, a junior women’s college in Westchester County, fell through when Briarcliff merged with Pace and Bennett College was left with no cure for healing its financial wounds. Shortly after the 1978 school year began, Bennett College closed its doors. Newly arrived students were offered admission to nearby Marist Brothers College in Poughkeepsie, NY. The school was gone but once again the Halcyon Hall structure remained. Over the years grand plans on reviving the property have come and gone. None of the plans became a reality and Halycon Hall ultimately fell into the realm of ruin and legend.

Most recently in May of 2014, yet another grand design was put in place for the property:

“Two locally prominent groups announced Tuesday they had bought eight parcels, making up 27.5 acres of the campus at the Village of Millbrook’s front door. All who pass are greeted with the eye-catching eyesore of the tattered and derelict centerpiece of the school, an 1893 former hotel known as Halcyon Hall.

That will come down, the new owners say. Part of the land will become a park. The rest awaits a planning process that they say will be one that “makes the best sense for the community.””
The Poughkeepsie Journal

I sincerely hope that this time out the reinvention renders results. Will I miss the old ruin? Most certainly, ruins have a way of stimulating your imagination, evoking emotion, and raising one’s curiosity. These are all good things if you are into niche history. Is it time for this structure to go? Yes it is. When looking at it in today’s state you can feel the suffering and shame that this now spectral structure must be experiencing. It is beyond any cure or hope of rebirth and so it needs to take its proper place in Hudson Valley history.