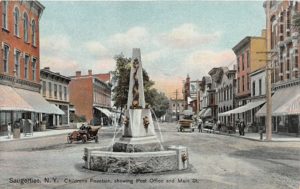 Anyone who has been to the Village of Saugerties in the Hudson Valley can tell you that the busiest part of the village is at the intersection of Main and Partition Streets, and that is exactly where the well intentioned citenzry had the much maligned Childrens Fountain erected.

The fountain is known as the Childrens Fountain, for the schoolkids who raised the money to build it. From day one of its existence, the fountain drew a good amount of heat over its odd looks and the central placement which many thought was a visual mar on their village.

Over time the Childrens Fountain which was supposed to enhance the village, became an almost ignored piece of architecture. Ignored by many but not ignored by the village drunkards who would congregate at the fountain after the Saugertie’s pubs and saloons closed for the night. The perfect storm, inebriates and a fountain for them to fall into and possibly drown in, and that is exactly what would happen on a regular basis.

Out of frustration or desperation, the Village Board decided to shut the Childrens Fountain down and they did. So, now Saugerties was stuck with a dry pink elephant of use to no one including village inebriates. The only solution was to move it, and move it they did. On June 19, 1911 it was moved to Seamon Park in Saugerties.