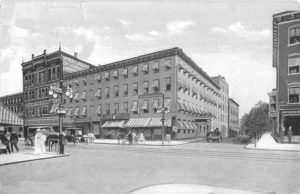 There’s a location in Poughkeepsie NY that is clearly a jinx for any hotels that rest upon it. Over the long years there have been three hotels at the northwest corner of Main & Catharine Streets, and all three have eventually burned down.

The first hotel to fall victim to the jinx was the Eastern Hotel. Theodorus Gregory originally ran a tavern on the ground floor of the building at 341 Main Street and eventually purchased the building & hotel in 1841. Shortly after the hotel was consumed by fire, Gregory constructed a new hotel named appropriately the Gregory House. The Gregory House had an interesting thing going on. It was a temperance hotel (no booze allowed) and the first of its kind in the City of Poughkeepsie. I’m surprised that he was willing to loose the alcohol revenue, but he was.

In 1865 Gregory sold the hotel to George Morgan a man who made his fortune in the charcoal business in northern Dutchess County. He renamed the hotel the Morgan House. Morgan seemed to be a popular fellow who went on to become Mayor of Poughkeepsie and a State Senator. In 1912 Morgan sold the hotel, and it was owned by a series of people until 1917 when a fire in the basement spread to the rest of the structure and consumed it. The fire spread to nearby structures and eventually required all available fire personal in the City of Poughkeepsie to put it out. The estimated damages from the fire was around a quarter million dollars. An immense amount of money back then. 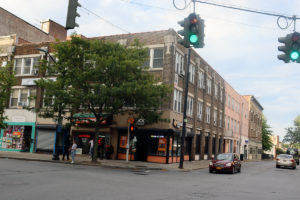 Ok, that’s two up and two down so far. The remains of the Morgan House were shortly demolished and up went a new five story structure at the same location. The Windsor Hotel was scorch free until 1943, when the top two floors burned down.

Today the bottom three floors remain and are home to street level businesses and office space above. The building is located at 341 Main Street.

You can decide for yourself, is it just bad luck, a coincidence, or a real world jinx?