The Dutcher House In Pawling NY

The Dutcher House In Pawling NY 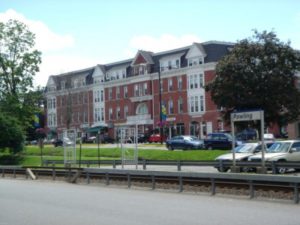 Anyone who has visited Pawling Village in Dutchess County, NY, has probably noticed the Dutcher House that dominates the village vista.

While the Dutcher House does not have a remarkable history, it does however have an interesting niche history that speaks to the development of the area and gives a pleasing insight into days gone by in Pawling Village.

The Dutcher House was built by John Bowdish Dutcher in 1882 – 1884. Dutcher was born in Dover, NY in Dutchess County in 1830, and was the son of a cattle broker. In 1857 he served as supervisor of Dover NY, also in Dutchess County. In 1860 he married Christina Dodge and they settled in Pawling NY.

Between 1861 and 1865 Dutcher served in both houses of the NY Legislature and in 1864 he was appointed Director of the NY and Harlem Railroad. He also served as President of the National Bank of Pawling, and owned a number of farms in the area, one of which eventually become home to the Trinity-Pawling School. Local history speaks well of Dutcher as a public spirited businessman who did much to help and support area development.

The Dutcher House was originally built as a hotel. From 1907 through 1910 Pawling School used the structure as its temporary home until they moved into their permanent location. Dutcher sold 150 acres of land on Route 22 to the school and in 1910 they moved out of the Dutcher House and into their own digs. The structure then reverted back to its original use, a hotel. Today the Dutcher House has been renovated into apartments. If you look at the location quickly it almost appears that it is several structures standing shoulder to shoulder with storefronts occupied by delightful shops and restaurants.

The hotel which occupied the site of the Dutcher House was built in 1850, and was kept as a public house until it was purchased by John B. DUTCHER, who removed the original portion of the structure and converted it into a dwelling house. In 1881 Mr. DUTCHER began construction of the large hotel known as the Dutcher House, one of the finest structures in the County. The building has a north frontage of 172 feet, and an eastern frontage of 116 feet. One the first, or ground floor, are two large stores, and two rooms, one fitted up as a Library and Public Reading Room, for the benefit of the citizens of the village, and the other devoted to town uses as a Town Hall. Over these is a large room to be devoted to the uses of a Public Hall or Lecture Room. The hotel contains fifty-six rooms for boarders, besides Parlors, dining, and reception rooms. The building is heated by steam and lighted with gas; and is supplied with pure water, which is brought one mile, from the mountains east of the hotel.

My own fascination with this structure is based in the where and what elements- Pawling NY is one of my favorite short-stroll villages in the Hudson Valley. It’s neat, authentic, and easy place to spend some time. The Dutcher House is the stand out visual in the village. This handsome structure greatly adds to the character and unique visual appeal of Pawling. I’m sure that many a local resident and visitor are glad that the old bricks are still standing and in great shape. I know I am!