A Bittersweet Ending To A Neversink Tale

A Bittersweet Ending To A Neversink Tale 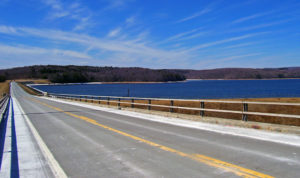 I keep being drawn to the names of two small Sullivan County hamlets that once stood near the banks of the Neversink River.

*Bittersweet, what a marvelous and prophetic name for a small Catskill Mountains community that would ultimately be forced to live up to it. And *Neversink, also known as Neversink Flats, whose optimistic sounding name did not shield it from the rising swell of the Neversink Reservoir. Both hamlets succumbed to the same fate at the same time- New York City’s thirst for water.

In spite of the intriguing names, both Catskill Mountains locations had one big thing going against them. They sat squarely in an area that New York City had identified as being a prime location for a reservoir.

NYC was experiencing yet another population boom and again needed more water. In the end it all trickled down to the same old story, supply and demand- The Neversink River and its watershed could provide the supply and NYC demanded it and got it. So eminent domain ruled the day and the Catskill lands were taken.

During the Great Depression and near the eve of WW2, inhabitants of both Bittersweet and Neversink were forced to leave their homes and businesses and the land was stripped and prepped for the building of the reservoir. The souls who inhabited these two long standing hamlets saw their homes, farms and businesses for the last time. Neversink had been moved off to another location while Bittersweet’s fate was not as kind. It was to become yet another Catskill Mountains Atlantis.

Neversink Reservoir is located in Sullivan County, approximately 5 miles northeast of the Village of Liberty. Formed by the damming of the Neversink River, which continues south and drains into the lower Delaware River. The reservoir holds 34.9 billion gallons at full capacity. Construction of the reservoir began in 1941 and the reservoir was placed into service in 1954.

Were there hard feelings? Undoubtedly! Most all of the accounts I have read indicate that NYC garnered no accolades from the local folks for their harsh actions and that many present day locals harbor grudges passed down from parents and grandparents. To add to this, many locals feel that reservoir ownership has made NYC intruders into their communities and political affairs.

My own feelings? Even though I was raised in NYC, I can sympathize with the locals. These long standing hamlets were theirs, part of their community, their communal history, and their personal history, and they were home. Families, business and homes in upheaval. A fracturing of people’s worlds. No people deal well with that or with forced migration, even over short distances, and this is America, where we are all raised to believe that things like this don’t happen. I can feel in myself the anxiety, the fear, the betrayal that the residents of those times probably felt.

It is interesting and totally understandable when reading even contemporary writings on this subject that the word “take” or some form of the word is always used to describe the transfer of these lands. It’s never a softer word such as “obtained” or “received” or even “purchased”. To residents of Delaware County, NY, who went through their own similar reservoir experience, it was for years referred to as “The Taking”.

*The name “Bittersweet” it is said was for the Bittersweet Vines that grew in the area.
*The name “Neversink” is actually derived from an Algonquian language phrase meaning “mad river” and just happens to resemble the English words for “unsinkable”.

Why not try this when traveling the Catskill Mountains or Hudson Valley- Stop almost anywhere, pull out your smart device (I know you have one), and search the location in Google by entering “history of” before the name. You may be both amazed and intrigued. History at your fingertips and before your eyes. You can’t beat that!