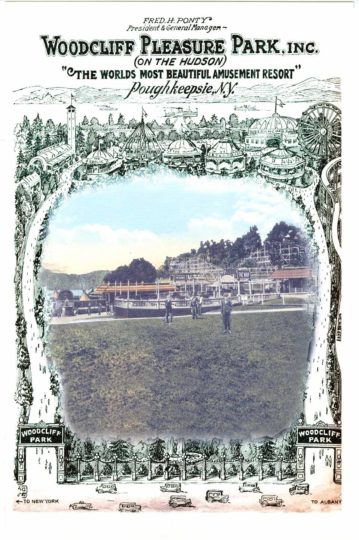 Contrary to popular belief, your grandparents did manage to have some fun. In the Hudson Valley of old, a sure fired way was a day at Woodcliff Pleasure Park in Poughkeepsie.

In the early part of the 1900s amusement parks were all the rage. In the Hudson Valley they dotted the countryside from Kinderhook to Orange Lake, but the grandest of all was Woodcliff Pleasure Park in Poughkeepsie NY.

Granted, the name is somewhat dated. I doubt anyone these days would use the word “Pleasure” to describe an amusement or theme park. Anyway, your grandparents clearly understood the messaging and many a young lad and lass counted the days to the upcoming outing with as much anticipation as your kids look forward to a trip to Orlando’s uber parks.

Woodcliff Pleasure Park was located on the Hudson River on what is now the northernmost part of the Marist College property. It was right across Route 9 (North Road) from the Home Depot, McDonalds, Starbucks, and several other modern pleasures of our age. The park was the dream of entrepreneur Fred Ponty and on July 14 of 1927 that dream became a reality with the opening of the park or the preferred term “Resort”.

The park’s location, half way between New York City and Albany, on the banks of the scenic Hudson River, helped to attract almost 20,000 visitors on a weekend from within and outside of the Hudson Valley. They made the trip by rail or by Hudson River Dayliner to this wonderland billed as “The world’s most beautiful amusement resort”. Visitors would disembark in downtown Poughkeepsie and take trolley cars to the park. The park also had a parking lot for those of your grandparents who were lucky or well off enough to own their own cars.

As always in these places the big attraction were the rides, and considering the times, Woodcliff Pleasure Park was loaded with them. Here’s the hype: 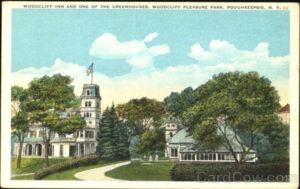 Woodcliff Inn And One Of The Greenhouses, Woodcliff Pleasure Park Poughkeepsie

The crowning attraction was the Blue Streak Roller Coaster designed by Vernon Keenan, the same man who designed Coney Island’s famed Cyclone roller coaster. At the time the Blue Streak was claimed to be the tallest and fastest in the world, with a height of 127′ and a speed of 65mph.

What ever became of Woodcliff Pleasure Park? A few things came into play that led to the 1941 demise of the park. The Great Depression placed food on the table ahead of “Pleasure” which resulted in a dramatic drop in visitors and income. Top that off with an unfortunate brawl at the park when the Inn was booked on the same day to both 3000 Odd Fellows from NYC and 1000 guests from a local Poughkeepsie church. Push came to shove between the groups and police and sheriffs were called in to restore order. Several visitors and police officers were injured and considerable damage was done to the park and its reputation.

In August of 1941 the park was closed for post brawl repairs. It never reopened, and so it passed from Hudson Valley attraction to Hudson Valley legend.