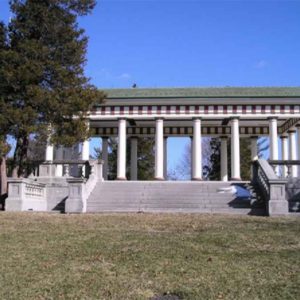 No kidding, this fine looking structure can be found sitting atop College Hill Park in Poughkeepsie, NY.

College Hill Park is set on the highest point in Poughkeepsie and has somewhat of an interesting history. The park has actually played home to a number of structures and area landmarks.

In 1870 the city reservoir was constructed below College Hill and became a favored place for locals to picnic, catch some down time, and take in concerts. There was a hotel on the site which ultimately failed. Plans for an orphanage were on John Guy Vassar’s list for the location but the orphanage never materialized.

In 1893 local cough drop mogul W.W. Smith of Smith Brothers Cough Drops purchased the land and donated it to the city for purposes of building a park. And they did.