A Steamboat On The Hudson River

Home » Blog » A Steamboat On The Hudson River
Previous Next
Advertisement

A Steamboat On The Hudson River 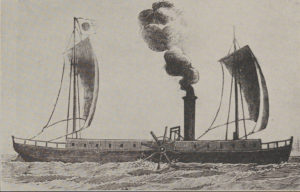 Everyone knows the deal on Robert Fulton and his invention that first appeared on our own Hudson River. You probably studied it somewhere near the end of your stay in grade school.

What you were taught is likely accurate but like many cursory once overs that you have been forced to absorb, the real story behind the surface history may be much different.

Robert Fulton and his first ever steamboat invention is likely one of those teachings that never went much deeper than surface or end results, i.e., Robert Livingston sponsored Fulton’s construction of the Clermont. It was launched in 1807 and carried cargo up and down the Hudson River much more efficiently than ever before. Ultimately it changed seafaring around the world from sail based to steam based vessels. This is all true, but what it misses is the motivation. The facts under the surface so to speak. Why would Robert Livingston toss money at Fulton to undertake a speculative project such as building the first steamboat ?

Here is the Sojourner’s retro-scoop on this steamboat deal. As is well known, Robert Livingston was from a wealthy family based out of his ancestral estate, Clermont, on the Hudson River in Columbia County.  He was a land owner, businessman, and a politician with influence enough to be appointed Minister to France. He also had enough influence and/or money to secure from the State of NY all steamboat shipping rights on the entire length of the Hudson River. I’m talking New York City to Albany. A pretty good deal if only one had a steamboat or two handy. But alas, there were none to be had and Livingston well knew this.

At around this same time Livingston had viewed a demonstration in France of a small steamboat built by one Robert Fulton. So Livingston the capitalist, approached Fulton the entrepreneur and contracted him to build the first cargo carrying steamship. The project was publicly dubbed “Fulton’s Folly” and to the dismay of a great number of detractors, the steamship touched into the Hudson River for its inaugural run on August 17, 1807. Except, it was not the steamship “Clermont” as you were taught that first pushed its way along the Hudson under steam power.

The documented name of the first Fulton/Livingston steamship was the “North River Steamboat”.  There never really was a “Clermont”. After a substantial rebuild around 1808, the ship was re-registered as “North River Steamboat of Clermont“. Hence, the Clermont. Several other ships were built by the enterprising duo and a substantial amount of coin was pursed by running cargo and then passengers up and down the Hudson River at much greater speeds and with greater payloads than the sailed schooners of that day could manage. Not to mention that little thing about a shipping monopoly.

Upon Fulton’s and Livingston’s deaths, the cherished shipping monopoly came under legal fire that resulted in the State of New York revoking the monopoly and opening Hudson River steaming to competitors such as Thomas Gibbons, Cornelius Vanderbilt, and others.

Now you know the story. To set things straight, this light romp was not intended to diminish the historic significance of what Livingston and Fulton accomplished. They were both men of vision who made history, or shall I say forced history to be made that ultimately changed the world.  The fact that monetary gain was part of the formula makes no difference in the least. Monetary gain has always had a significant influence on grand designs and progress. You can ask Tommy Edison or Hank Ford or Chris Columbus or Johnny Hancock or Billy Gates or Stevie Jobs (gotta keep the Apple geeks happy) or ……….

Remember, cherish your history. It will never come again.