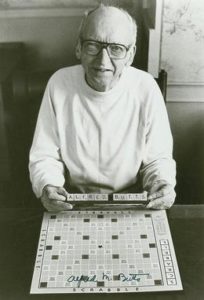 Everyone is familiar with that argument promoting game that goes by the name of Scrabble. C’mon, admit it, it’s one of the only games still around that can make you put your game controller down for a while.

This enduring game has been purchased by almost 200 million people since its inception, which means that many times that number have played it. Everyone I know has.

Scrabble was the brainchild of one Alfred Mosher Butts, who was born in Poughkeepsie, NY, in 1899 and graduated from Poughkeepsie High School in 1917. Butts was a working architect who designed suburban homes in Westchester County. That is until the job slaying Great Depression caused him to be laid off in 1931.

Butts always liked games, especially chess, crosswords, and anagrams. In the early 1930’s he started to develop Lexiko, the father of Scrabble, in hopes that he could market it and make some extra cash. Butts spent a great deal of time in his kitchen in Queens NY, cutting out small squares from plywood and gluing paper letters to them.

In 1934 he started selling the game around his Queens neighborhood for $1.50 each. By the end of the first year he had sold 84 sets for a total loss of around $20.00. Did that discourage Butts? It appears not. He regrouped, created a board for the hitherto boardless game, fine tuned the rules, and went at it again under the name- Criss Cross Words. He had no better luck with the revised version and in 1935 when he returned to work as an architect, Criss Cross Words went on his shelf to collect dust.

The game stayed on the shelf until 1947 when Criss Cross Words fan James Brunot, the director of the President’s War Relief Control Board in Washington, D.C., during World War II made Butts an offer. He would buy the manufacturing and distribution rights to the game. Butts would receive a royalty of 2.5 cents for each game sold.

Brunot did some redesigning of the board, fine tuned the rules some more, and tagged the game with a new name, Scrabble. Sales started in 1948 but were slow until 1952. In 1952, the president of Macy’s in NYC decided to stock the game in his store. That was just the move needed to put the game in high gear. By 1954 sales went from 5,000 per year to almost 4 million.

As Americans tend to do, they will often turn a pastime into a passion. In the mid 1950’s Scrabble became a craze. You just had to own one and Scrabble clubs, organizations, newsletters, and tournaments were cropping up everywhere. The love affair had taken hold.

It is said that Butts earned slightly more than 1 million dollars over his lifetime from sales of the game. Hey, good for him! He had the ingenuity and the tenacity to hang in through the lean times. Butts died in Rhinebeck NY in 1993. His obituary in the NY Times included this: “”One-third

[of the royalties] went to taxes. I gave one-third away, and the other third enabled me to have an enjoyable life”

Ok, that was a long read so take a break and go play some Scrabble. I’m sure you can find someone you can beat.