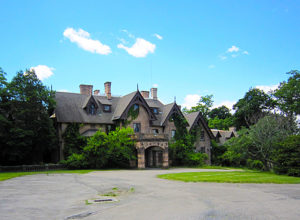 Tioronda in Beacon, NY was the country estate of General Joseph Howland, who by many is considered to be Beacon’s premier philanthropist.

Joseph Howland was born in 1834 in New York City into a family that amassed considerable wealth in the China Trade. His ancestors include a signer of the 1620 Mayflower Compact. His father, Samuel Shaw Howland, was a partner in the shipping firm of Howland & Aspinwall. His mother was Joanna Esther Hone, the niece of Philip Hone, mayor of New York City.

In 1859 Howland purchased 97 acres of farm property at the foot of Mt. Beacon, the area then being known as *Matteawan. On this property, Howland built the family country estate, and the gothic styled Tioronda Mansion. . The architect was Frederick Clarke Withers, once a partner of Calvert Vaux.

The structure was completed in 1861, and was originally named “Glenhurst,” the Howlands later changed the name to the Native American word for “meeting of the waters” or “Tioronda”. The house was filled with all custom made furniture and was steam heated and lighted by gas that was produced right on the property.

It was Howland’s dream to live the life of a country gentleman. The dream and the lifestyle did not last very long. At the outbreak of the Civil War in 1861, Howland signed up with the 16th New York State Volunteers. After a short time he was promoted to colonel, and in that capacity served at the first battle of Bull Run and in 1862 in the Battle of Gaines’ Mill.

It was at Gaines’ Mill that he was wounded in the leg. Even though he was wounded, he refused to leave his troops until the battle had been decided. This action earned him a citation for bravery and a promotion to Brigadier General. However, due to the wound he was unable to serve in that capacity and retired from the military.

General Howland went on to serve as New York State Treasurer from 1866 to 1867. He played an active role in drafting the trust deeds for Cornell University and in organizing the Hudson River State Hospital for the Insane. 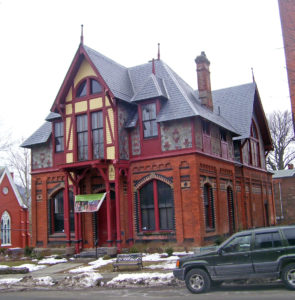 In Matteawan, Howland was instrumental in building the Presbyterian Church and the public library that still bears his name. The building is now the Howland Cultural Center and is listed on the National Register of Historic Places. The library moved to an expanded Main Street location in 1976. He also took an active part in the establishment of the National Bank at Fishkill-on-Hudson, and in establishing Highland Hospital in Matteawan.

The General passed away in 1886 and in 1915 the property was converted to the nation’s first privately run psychiatric center. Tioronda was renamed Craig House and was managed by Dr. Clarence Slocum, who had very progressive concepts for that day. Most “asylums” back then resembled prisons, more than treatment centers. Dr. Slocum however, believed in progressive treatments that included intensive talk therapy, freedom to take walks and participate in recreational activities, as well as fine dining. Craig House had facilities for golf, skiing, swimming, a gymnasium, and painting.

In short order Craig House gained a national reputation and became the treatment center of choice for a who’s who list of the rich and famous. Tioronda’s conversion from country estate to mental health facility would have pleased the General. Both General Joseph and his wife had a lifelong passion for the humane treatment of those suffering from mental health issues. In 1999 Craig House closed its doors. The structure has remained unused and decaying since then.

What’s happening with this impressive property? Other than the rapid decay, it’s hard to tell. Rob Yasinsac of Hudson Valley Ruins provides this information:

“A 2003 auction emptied the house of its fine furnishings and antiques. Investor and art collector John L. Stewart bought Tioronda that same year, and in this time the property has remained disused. Stewart’s company Tioronda, LLC, plans a “small residential development” on the estate. The mansion will be a single-family residence. In October 2011, two buildings, the carriage house and a workshop, were demolished.”

It would be a travesty if this fine structure decayed to the point of no return. Similar to the fate of many other Hudson Valley structures, it may however come to pass.

*The name Beacon was adopted when in 1913 the villages of Matteawan and Fishkill-On-Hudson were incorporated as the City of Beacon. While the name Fishkill-On-Hudson is hardly used, the name Matteawan is still used by many local residents when referring to the area surrounding the western base of Mt. Beacon.