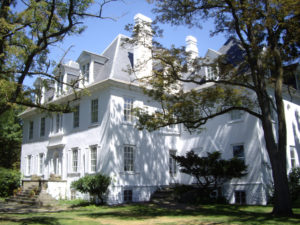 The Friends of Clermont is a not-for-profit organization created to support the work of NY State in conserving the living legacy of Clermont State Historic Site. We engage our varied users to explore the multifaceted assets of the site, broadening use, access, and enjoyment.

The Friends of Clermont have developed the site’s growing research library, restored three formal gardens, restored the circa 1910 Children’s Playhouse, mounted two important loan exhibitions, and encouraged the donation of nearly 8,000 historical objects to Clermont’s collections. The Friends also supports additional educational programming for local youth so they can connect with our site.

The views from Clermont are the most spectacular views of the Hudson River Valley from anywhere along the river. The history of the Clermont mansion is even more remarkable.

The original Clermont mansion was built by Robert Livingston around 1740 on land inherited from his father Robert Livingston, the First Lord of Livingston Manor. The First Lord left 13,000 acres to his second son, Robert, splitting them off from the rest of his 160,000 acre estate upon his death in 1728.
​
The most famous member of the Livingston family was Chancellor Robert R. Livingston, Margaret’s son. So called because he was New York’s first chancellor, the highest judge in the state under the original state constitution, The Chancellor was an active patriot during the war. He served on the Committee of Five to draft the Declaration of Independence, drafted the New York Constitution and served as the country’s first Secretary for Foreign Affairs. After the war he had the distinct honor of giving the presidential oath of office to George Washington in 1789. The Chancellor was also the lead negotiator of the Louisiana Purchase and the co-inventor of the first commercially viable steam boat.

Clermont passed through four more generations of Livingston’s before being turned over to New York State in 1962 for use as a historic site. Every generation left an indelible mark on the house and grounds while helping to preserve the rich history held within the bounds of the estate.
​
The current site encompasses not only the mansion, rebuilt by Margaret Beekman Livingston and added onto by later generations, but over 500 acres of landscaped gardens, meadow and woodlands, preserved for the enjoyment of future generations.