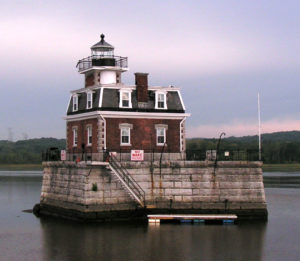 Located in the middle of the Hudson River between the Village of Athens and the City of Hudson, the Hudson-Athens Lighthouse was built in 1874 to guide ships safely around the Middle Ground Flats. HALPS is the sole owner of the house, and is responsible for the restoration, maintenance, and preservation of the lighthouse. The lighthouse continues to be an active aid to navigation on the river.

As visitors arrive at the lighthouse, they climb the metal stairs and enter the interior of the lighthouse where they are welcomed by tour guides, and often, Emily Brunner, who lived at the lighthouse in the 1930s and 1940s. Emily, a favorite of all visitors, relates factual stories about the life style of her father who was the light keeper, and the entire Brunner family.