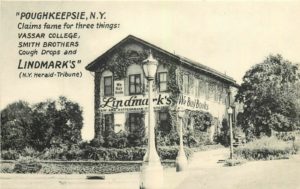 Lindmark’s Bookstore started with John Lindmark who purchased a rare book for $300 and sold it for $7000. That was all it took. From then on John and his wife Rae were hooked on books, moving to Poughkeepsie and setting up their first bookstore on Liberty Street in 1912.

They soon filled that to overflowing with books and moved to a larger location. Outgrowing that location they moved to 290 Main Street and in 1933 an even larger location at the old Christopher Columbus schoolhouse on Church Street.

By 1945 Lindmark’s Bookstore was said to have somewhere around 300,000 books that were valued at around $2million. It was estimated that the book inventory required 14 miles of shelving and contained more books than all of the area libraries combined.

In 1961 the City of Poughkeepsie planned to build a clover leaf access to the Mid-Hudson Bridge. This meant that the state would have to take Union Square, Harris Street, South Clover Street, and Church Street. Lindmark’s Bookstore was right in the middle of these plans. The state offered Lindmark $22,000 but offered him nothing for the transport and storage of his massive book collection.

Mr. Lindmark was known to be somewhat of a hot tempered and stubborn man when it came to business dealings and negotiations. So when in 1963 the state offered him $3,000 toward relocation and storage of his books, he turned it down. A number of local institutions offered to assist with the relocation and storage but they were also turned down. Lindmark stubbornly insisted that the state shoulder the entire cost. The state would not agree and eventually a court order was handed down and in April of 1963 the books were removed from the building and placed on the street.

This piling of books became a public spectacle, with not only the public contributing to the loss and scattering of very many books, but the weather also assisting in the destruction of a large number of books. Ultimately the city had enough and the remaining books where piled up and disposed of by the most convenient method, a burning.