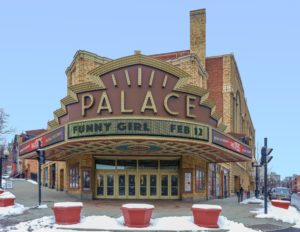 The Palace Theatre, a grand cultural and entertainment facility in the heart of down-town Albany, NY, first opened its doors in October, 1931, during the middle of the Great Depression. The largest theatre in a city already noted for a number of opulent movie houses, the Palace Theatre stands today as the sole survivor of this period and continues to make history with a widely diverse offering of popular acts and cultural events.

Today, the Palace Theatre proudly continues its tradition of hosting the finest in live entertainment. Home to the Albany Symphony Orchestra, artists as diverse as the Rolling Stones, Jerry Seinfeld, Bruce Springsteen, Roy Orbison, Tony Bennett, and Melissa Etheridge have graced the Palace stage over the years, along with world-class ballet, Broadway, family and children’s theatrical production, city-sponsored events and a classic Hollywood film series. The Palace Theatre stands as the premier entertainment destination in the Capital Region.